The map above shows the output of my first waypoint-flown mapping mission with the Phantom 3 Pro, using the pretty remarkable Maps Made Easy software. (Hint: Use the layer icon in the upper right to turn on and off layers, including the colored Digital Elevation Model.) 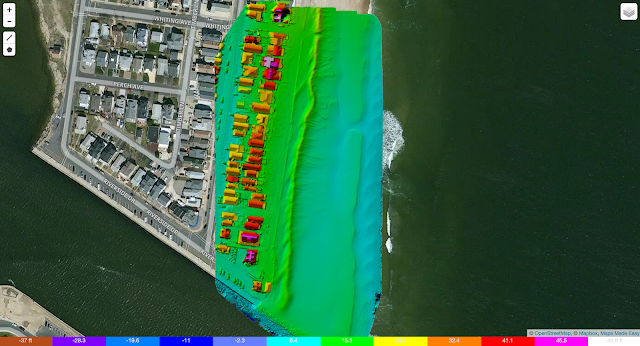 The service allows you to upload georeferenced photos collected from your drone, and automatically stitches them together into a usable map. Given proper overlap and consistent altitude and focal length, it can create a stereo derived Digital Elevation Model, and even generates a point cloud 3D model.

I'm going to take a little time below to discuss my experience with the platform thus far.

What I really like about their business model is there is no up-front cost and they even give you some free quota to start. Once you've exceeded the free trial quota, you're able to purchase additional "points" as needed for processing. This is a big pro for me vs having to shell out a lot of money for a license for competing, desktop based system. Points for a particular "job" are calculated by the size, features of processing, and the priority in which you need your data processed.

I work in enterprise geospatial software and I admire what their team has done here in many respects. When i previously worked with agencies and professionals that wanted to use cloud based services my company offered, one of the number one requests was the ability to get priority processing of shared cloud services. Maps Made Easy has implemented this from the start, which is smart. By default you're thrown into the general queue and get an estimate when your job will be done, but, if you're really in a hurry you can pay a little more to jump the queue.

Yesterday I experimented with the service at home by free-flying, and taking pictures with guestemated overlap manually around the house. It wasn't very precise, but it worked surprisingly well. I know that creating the best models requires as consistent an overlap, and regularity of input models as possible, and that is why they have created both a Flight Planner and a mobile app that allow you to define your platform, and area of collection, and automate the process of generating and flying a flight plan.

One major downside for me is that their mobile app is iOS only. There are no plans to make an Android version. Being an Android guy, I've been flying my drone with a Nexus 9, and I was forced to borrow an iPad from my cousins' 3 year old son (Thanks, Finn!) for the day to try out the application.

This was also my first time trying waypoint flying with the Phantom 3 Pro platform. As such, this was the first time that my "drone" was actually a drone. As an aside, I debated calling this blog Jersey Shore Drone for a while, because I know Unmanned Aerial Vehicles / Systems and Quadcopters are more accurate terms, but, let's be honest - everyone calls these things drones and nobody has proposed a name that has stuck yet. Today, I had about 3 different people on the boardwalk ask, "Are you flying a drone?" or "Is that a drone?" Not a single person asked me if I was flying a Quadcopter...

Anyway, the family and I went up to the boardwalk on what was a chilly but beautiful and calm winter day here in Manasquan and with the borrowed toddler's iPad in tow I set out to try mapping a section of the beach with the drone.

I chose the location for a number of reasons.


The Maps Made Easy app was pretty straightforward. I was able to easily delineate an area of interest, which was basically the entirety of Surfer's beach and Whiting 1 and 2 from the ocean to the Inlet to First Avenue up to the Whiting access ramp. I wanted to pick an altitude for collection that would provide a high quality ground sample distance, be clear of any vertical obstructions, and minimize the number of points for collection. With a quick test flight, I settled on 150 feet.

I then had to switch the Phantom 3 Pro controller into "F" mode and upload the waypoints that were generated from the flight plan. Then it was just a matter of using the app to launch the drone to 150 feet and then the drone just took over.

It flew to the starting point over the Inlet and oriented itself to the north west. The drone then started flying along the predetermined flight path, and automatically oriented the camera to nadir and snapped a picture every few seconds. It flew just north of Whiting, then turned west, flew a few feet, and then turned around and flew south. After around 7 minutes, and several passes overhead, it was done, and it flew back to the launch location roughly in front of 413 Beachfront. Magic.

While this was truly fully automated, I can't stress how important it is that anyone using a system like this follow the following (at least in the US):
The Maps Made Easy pilot app makes it fairly easy to abort a job and take over, and you can easily switch modes back to "P" and take full control in a matter of seconds.

Once the flight was complete, I had some battery left so I did a free flight for a bit taking video of the US Army Corps of Engineers dredging the inlet, then landed and we went home.

It only took a few minutes to download the 124 images that were collected off of the drone and upload them to the Maps Made Easy site. Processing the flight, which was 13.52 acres, with mensuration, cost me 336 points. This would be a job that cost a little over $10 if I wasn't using the promotional signup points. 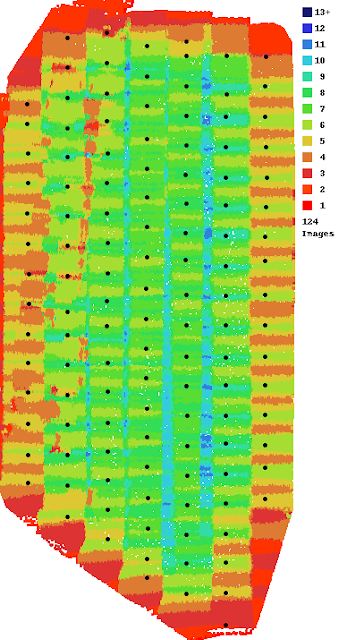 What isn't clear to me is what vertical datum is being used, nor how accurate the exports actually are. I'm sure I can get this information from Maps Made Easy however.

The ocean and parts of First Ave are cropped out; I know they were in the input sources, but may have lacked significant overlay so I think I just need to buffer a bit more on future collects. Not sure if water is automatically being masked out or not.

The 3D model is pretty good, but I believe you need to fly the mission over again with the camera set to an oblique angle to capture things like building facades properly.

In addition to sharing the interactive map and 3D model above, I'd like to share some data with the GIS professionals.

As with anything on this site, it is 100% free for non-commercial use, I just ask that you credit www.jerseyshoredrone.com.

Overall I'm very impressed with both the Phantom 3 Pro platform and Maps Made Easy's service; I guess I'm going to have to source a used iOS device to keep doing these types of flights.

I have to think there is some value I can offer, particularly in the coastal communities of the Jersey Shore where the shoreline and elevations change so frequently.

I'd like to expand collection to cover all of the Mansquan Beachfront next. It would be interesting to catalog the existing state of the beach, including the winter "dunes" and compare later this season and periodically going forward.
Labels: Manasquan Orthoimagery