According to sources, the dredging started to encounter more stones than the project team wanted to place on the beach. Material will continue to be dredged and will be pumped to the Gull Island CDF.

Due to weather conditions and my end of the year work schedule I wasn't able to fly a mapping mission until December 23rd, 2016. I also had to wait about 45 minutes past mean low low water for a sun angle that was appropriate for collection. This means that the newest flight has a water line a little bit higher than the absolute lowest level. Still, you can see the significant increase in beach width afforded by this project since September in the swipe map below that compares the September 13th flight to the December 23rd flight.

I've also included this new flight in the ongoing swipe map which compares all the flights since January 7th, 2016.

While you can see the horizontal gain, it should be noted that there was a significant increase in the height of the beach near the waterline. For instance, the following jetties on Whiting beach were significantly covered by this new sand.

I wanted to be able to quantify the width increases realized from this project so I created 7 measurement points from the boardwalk to the water's edge and measured the width of the beach at each of those points for both flights. 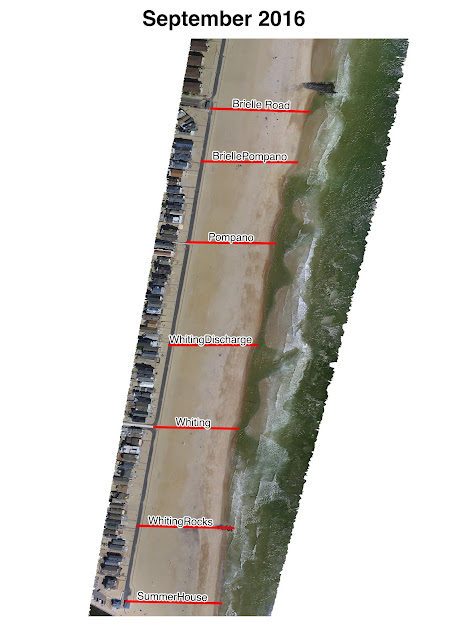 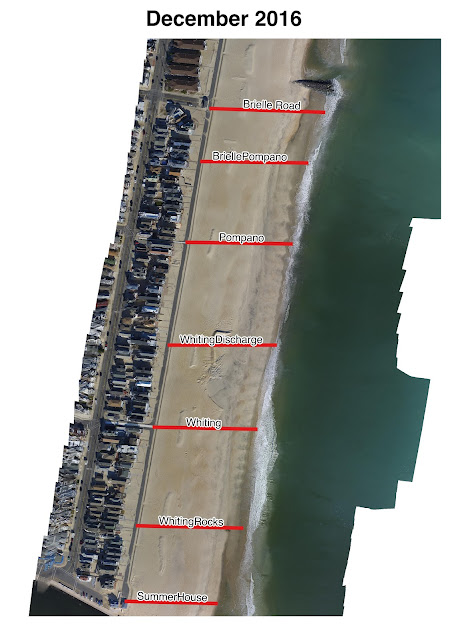 I then created some simple graphs to analyze the change for each measurement point.

While there was actually an 18 foot width decrease on Inlet Beach right next to the Inlet Jetty, for the other 6 measurement points between Whiting Beach and Brielle Road, there was an average increase of 50.5 feet of beach from this project, the largest being 65.6 feet right at the discharge point.

While we'll have to wait a few months for the "bare feet" test, the beach looks good! Mansquan's use of the tractor and beach rake have helped a lot in keeping up with some of the trash that was kicked up by the dredging and helped to evenly spread out the organic material. I think this will prove to be a very successful project and a useful one for maintaining the width of our beach; the primary defense against storm surge for the beachfront.

Like previous flights, I want to provide the data for analysis; it is 100% free for non-commercial use, I just ask that you credit www.jerseyshoredrone.com in any reports or products you produce.